“It took me ten years to get here.”

From my early moments as an intern with McCreesh, Steven has expressed to me his passion for continuing his mix martial arts proficiency. Steven made the goal to rise in proficiency level in Tae Kwon Do. Slowly but surely began to ascend in the ranks, attaining his Red Belt just recently. With every step reached, he would come to me and show me his certificates of completion. We’d high five and talk at length about the skill he would have to perform for the test. We’d complete HUD Monthly paperwork and his goals revolved around continual growth in Tae Kwon Do. We’d reconvene weeks later to discuss goals and he’d tell me what he could have done better and how he would do that.

With these goals gradually being accomplished, Steven made the decision to put his skills to use. Steven decided to start tournament fighting. He knew it would be difficult and has trained exhaustively. Hard work has paid off because he recently won the 2nd Place trophy in the Sparring Division of the Master Khechen Championship in Niagara Falls, NY.

This resident is full of determination, resiliency, and guts. Albeit the failures along the way, Steven’s success is that much sweeter because of it and recognizes that these are lessons learned. Steven sees a future with Tae Kwon Do. He said to me this morning after excitingly showing me his trophy “It took me ten years to get here. Imagine what I can do in the next ten years. I could be teaching or even have my own school.” 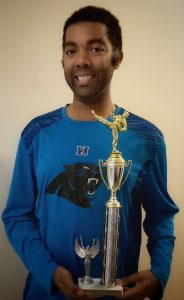