The Rapid Rehousing Program, which was established in 2015 as part of the Scattered Sites Program, places individuals and families in privately-owned rental units throughout the Mecklenburg County. The supportive services in this program are designed to transition residents to self-sufficiency within two years. 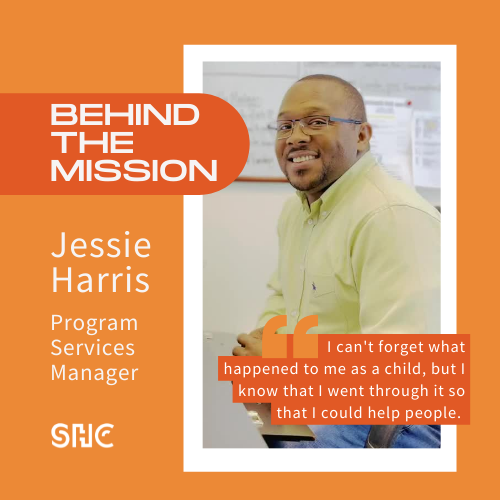 When it comes to Jessie Harris’ impact on our SHC neighbors, he has a not-so-secret superpower at his disposal, which is his ability to relate to those living unsheltered and afraid. During his childhood, he witnessed drug dealing, addiction, and violent acts. “There is nothing that I can ever forget,” he says, but he knows that everything that he experienced was meant for him to help others. His earliest childhood memories are of sleeping in cars with his mom and two siblings or even on park benches from ages three to six. Because of continued instability, by age 11, Jessie left home to be on his own and landed in foster care, until he aged out at 17. By age 14, while in foster care, he began to get his footing for what would later be his calling—advocating for those in need.

Jessie has been with the SHC Family for 8 years and was recently promoted to Manager of Program Services. Our mission is very close to Jessie’s heart. In his role, he is leading and providing support to the team that is out in the field every day providing case management and support to both our unhoused and/or recently unhoused neighbors in the Charlotte community.