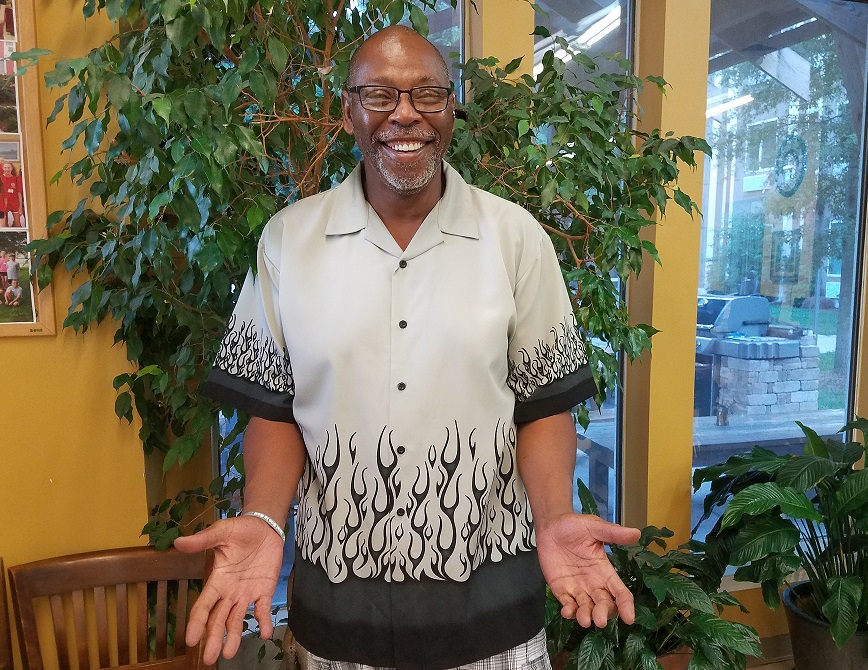 Just being able to come and go as I please… I love it!

Posted at h in Success Stories by
0 Likes
Share

If you were homeless, you would know it—or so you might think.

Not so with Joe. Joe was homeless for many years before he realized it. As a young adult, addicted to alcohol and drugs, he told himself that his home was with his friends. Long before the days of AirBnB, Joe lived as a kind of permanent couchsurfer, shuffling among the living rooms of friends.

“I always lived off other people,” he says.

Joe realized he was homeless upon pondering the fact that, no matter where he “lived,” he never had a key. If he truly had a home, then he could decide when to come and when to go. But Joe was entirely at the mercy of his friends’ schedules. They got to say when he came and went.

Eventually, Joe’s substance use escalated. At one tailgating party in 2010, Joe became so intoxicated that he had to be rushed to the emergency room. The doctor told him that if he continued drinking, he would almost certainly end up dead. After being released from the shelter, Joe started staying at the homeless shelter, which is where he decided to get sober.

He plugged into the Rebound recovery program with Charlotte Rescue Mission, where he found the tools he needed to live sober and to become a more productive member of society. He started working—first as a forklift operator, next as a handyman, and then as a carpet cleaner. After completing a nine-month detox, he decided that we wanted to live in a community that would support his newfound sobriety. So in 2012, he moved into McCreesh Place, his first home as an adult.

“It brings tears to my eyes,” he says, “It’s my home. I had always stayed with other people or at the shelter. Just being able to come and go as I please… I love it!”

And Joe is always coming and going—usually to work. At the airport, he works 40-50 hours a week as a freight coordinator. And when he is not working at the airport, he is often working at McCreesh Place—on one of the Sober Living classes, proactively maintaining his sobriety.

Joe’s rhythm of life—going to work, coming home, staying sober—is something he never had until he moved into McCreesh Place. His current lifestyle is remarkable for being unremarkable. From the outside, one might think of supportive housing as a very different form of life. From the inside, though, it often looks a lot like your life or mine: busy, happy, and dignified in its normalcy.