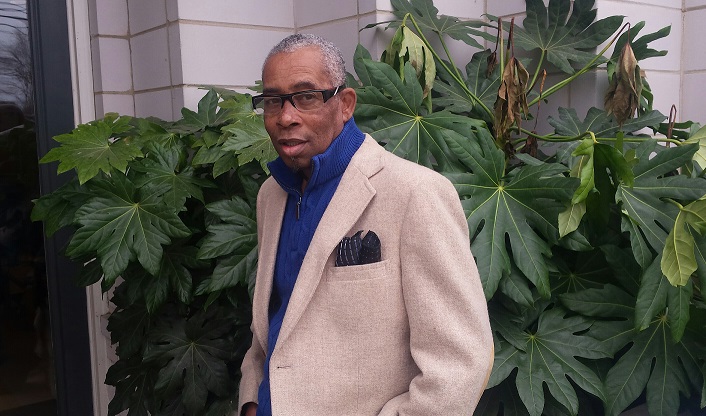 When David was growing up in Winnsboro, South Carolina, he liked to play water games in the public swimming pool with his friends.  In one of these, adults would scatter loose change into the pool and watch it sink, like they were making a wish.  Then the children would race to the bottom to fish it out.   David was good at this game.  So good that his friends started to call him “Fish.”  The nickname followed him to Charlotte when he lost his mother to cancer when he was seventeen and he had to move in with his older sister.   That was almost fifty years ago.

For the holidays, David will be celebrating with his girlfriend, at her place—an ordeal that requires transporting his wheelchair and oxygen tank to her upstairs apartment.   David has a chronic lung disease that has taken half his bodyweight and makes it difficult to walk around without losing his breath.  But he assures me that his girlfriend is well worth the trouble.  Telling me this, his cheeks fold into dimples as he flashes a bright wide smile.  He still has a boyish charm.

“I have always had an easy life,” he says, “Except when I made it hard.”

David smoked crack for the first time when he was 37.  At the time, he was living and working as a handyman at Morningside Apartments, where he had become friends with his downstairs neighbors.  The neighbors would slip away while they were all drinking together and return “looking stupid.”

David thought, “Why are they looking stupid?  The liquor is in here.  So stupid me, I wanted to figure out what they were doing.”

Soon David was addicted to more than just alcohol.  As his addictions grew, he became increasingly “stupid” at work.  But he was never fired, perhaps because he was so well-liked.  When he started showing up to maintenance calls drunk, the standard response was to offer him another beer.  And when his bosses suspected him of doing harder stuff off the clock, they were mostly just concerned.

David was forced to face the consequences of his addictions only after Morningside was sold to developers and his job ceased to exist.  For the hassle of moving, David was paid $6,500—which sounded like a lot of money at the time.  But in the first few days, he spent almost half of it on drugs.  Doing the math, he could see where things were heading.  Without a steady paycheck or a forgiving employer, he was racing “straight for the rock bottom.”

With still a couple thousand dollars in his pocket, David checked himself into detox.  As he reasoned: if detox was unavoidable, because the money would run out, then it made sense to enter the program before this happened.   In detox, David was frightened by graphic videos of addicts dying from drug-induced strokes.  Between the fear of losing his money and the fear of dying, he found the motivation he needed to get clean.

From detox, David moved into a halfway house, and when his money ran out, he went to the homeless shelter.  Shelter life was an adjustment for David, who was used to having his own place.  But the transition was much harder for his girlfriend at the time than it was for him.

“She had never seen me like this.  I explained to her that I just needed some time to get back on my feet…but the tears just kept streaming down her face.”

David stayed at the shelter for just shy of one year.  As the months passed by, he had unnerving conversations with men who had been there for two or three years or more.  They were still trying to get back on their feet.  David didn’t want to wait that long.  Ever since he had become sober, he had also been homeless.  He wanted to give sober living a try without the added burden of homelessness.

His chance came when a spot opened at McCreesh Place after he had been sober for nine months.  Back then, nine months was an important milestone, because you had to be sober for that long to be considered to live at McCreesh Place.  Because David is good at community, and is committed to recovery, his case manager at the shelter thought McCreesh Place would be a good fit.  She was right.

What stood out to David when he first moved in was how quiet it was.   At the shelter, he slept in a roomful of other men.  Besides their constant rumble, he had to deal with the internal noise of not knowing his next step.  In comparison, McCreesh Place was like a sanctuary.  On the day he moved in—a Saturday—only one staff member was working.  A few elderly residents were quietly gathered in the common space.  For the first time since leaving his old life at Morningside (which was bulldozed and replaced by condominiums), David walked into his own room.

He took a moment to enjoy the peace and quiet.  He was clean.  And he had a place to live again.  He had made it.  And he knew he was lucky.