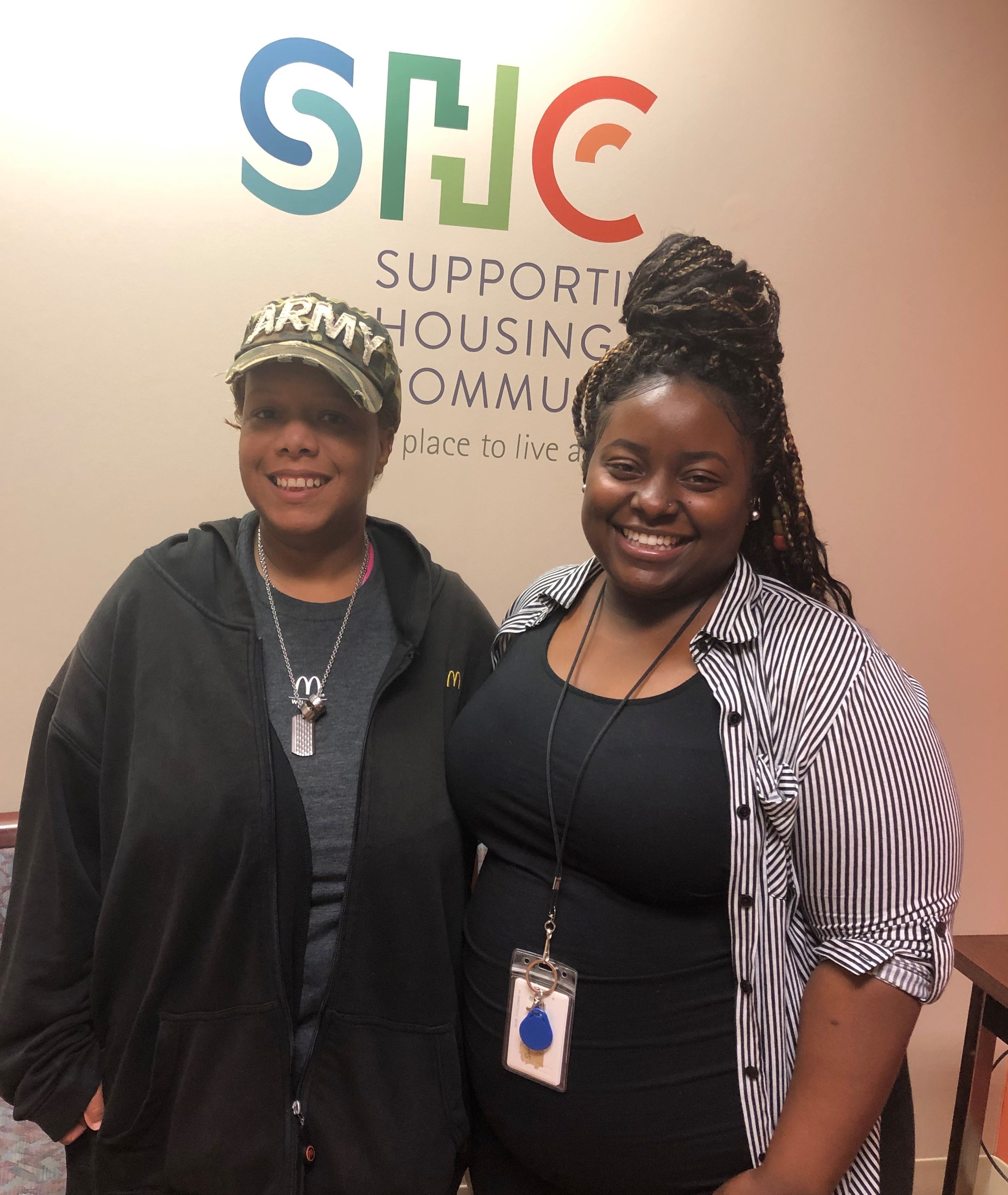 Ebony was in the emergency room for only two weeks.  But during that short time her entire life was turned upside down.

When she checked out of the hospital, she just assumed she’d go home.  She did have, after all, her own apartment full of furniture and (more importantly) her own three children.  But when she arrived home and prepared to walk inside, she was shocked to discover that the locks on her door had been changed.  She was evicted.  Except for the car she was driving, all her possessions were locked inside—and never to be seen again.

Suddenly, Ebony felt the need to get out of town.  Her children were safe and sound at their grandparents’ house, where she had left them on the way to the hospital.  She checked to make sure they could stay for a while.  Then, in her sole remaining possession, Ebony drove from Greensboro to Charlotte where she would experience homelessness all alone.

Fortunately, she was not completely alone for long.  Within her first few weeks in Charlotte, she met other homeless people who imparted essential street wisdom.  She learned, for example, of a train station where she could stretch out on a bench in the early hours of the morning and steal a few hours of sleep.  And when sleep wasn’t an option, she learned of an all-night bar where folks gathered who had nowhere else to go.  Ebony also discovered Room in the Inn—a program in which churches provide a bed and breakfast for the homeless.  Between the train station, the bar, and the churches, Ebony made the best of a bleak situation.

She even found things she liked about homelessness.  For example, she liked the sense of community.  Her new homeless friends watched out for each other and huddled close together.  Their shared challenges established deep bonds.  She also didn’t mind living “off the grid.”  While homelessness was challenging at a basic survival level, it at least afforded safety from the monthly avalanche of bills.  She didn’t have to worry about rent, furniture, or evictions because everything she owned now fit in a few bags.

What Ebony did not like, however, was being away from her children.  While they adjusted well to life with their grandparents, she missed the days when they all lived together as a family.  Since she had no stable address, her children couldn’t even visit.  Except for the pull of her children, Ebony might have floated “off the grid” forever.  But because of her deep desire to provide for them, she prepared to return to a rooted life.

She would need a lot of help, however, in finding her way back home.  To cope with the challenges of being homeless, Ebony had taken to writing poetry, and she read her poetry to Sunti the first time they met.  A friendship was born.  As a member of SHC’s Street Outreach team, Sunti’s first order of business was to connect Ebony with mental health services.  Thus, Sunti mobilized a Community Support Team—composed of a therapist and two case managers—who visited Ebony at a designated spot on the street.  This team addressed her most urgent needs.  Without a stable home, however, Ebony would continue to experience tremendous amounts of stress.

To move Ebony towards housing, Sunti scheduled a Coordinated Assessment.  During that assessment, Ebony was assigned a “vulnerability score” based on a range of factors such as her history of trauma, quantity of debt, and the quality of her support network.  According to the test, Ebony was extremely vulnerable but far from the most vulnerable homeless person in Charlotte.  Whenever SHC has openings, the housing is offered to the homeless person with the highest vulnerability score (i.e., the most vulnerable person).  As a result of this policy, Ebony would have to wait for a long six months before entering our program.

The delay gave Ebony time to prepare.  After living on the streets for so long, she wondered if she could handle a “normal” life again.  Certainly, she wasn’t looking forward to facing all those bills.  To make her new life work, she would need a job.  Before she experienced homelessness, Ebony worked as a teacher’s aide in public schools.  While this job was meaningful, it was also extremely stressful.  For this time of transition, Ebony decided to steer clear of her former career and settle for a less stressful position at McDonald’s.  Stuck on the wait list for supportive housing, Ebony worked at McDonald’s during the day while sleeping on the sidewalks at night.

Eventually, a spot opened for Ebony in SHC’s Scattered Site Program.  When she opened the front door to her new apartment, Sunti was standing beside her.  After waiting for so long, Sunti was thrilled.  For Ebony, the experience was more “surreal” than anything.  After three years of homelessness, she forgot what it was like to have a home.  Also surreal was the lack of furniture.  She was reminded of her earlier eviction.  Not to worry, Sunti explained: volunteers were on their way with furniture.  Ebony would have a bed to sleep on that night.

“I can’t believe how well I sleep now,” Ebony said, when asked what was most surprising about joining SHC.  Living on the street, she could never completely let her guard down.  But now Ebony sleeps like a baby.  In her rejuvenated state, she has done well at work.  Just last week, she was promoted to crew manager.  While Ebony is slowly rebuilding her life, her children are still living with their grandparents.  They are all teenagers now, with their own friends, schools, and adolescent problems.  They are not ready to uproot their lives to come live with their mother.  But she hopes they will visit her soon.  She has prepared a warm place for them.