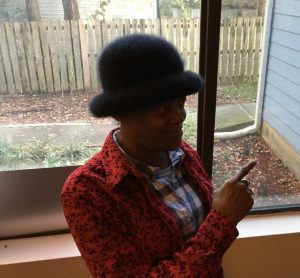 Zina was living a happy and healthy life until, one day, a tree limb snapped and hit her on the head.  Initially, she was dazed but didn’t think much more about it.  During the next few weeks, however, she noticed that something about the way she was thinking was different.  She could still initiate a line of thought just as she always had.  But she was having trouble completing the thought—tying the different strands of her thinking together, establishing a beginning, middle, and end.

Around the same time Zina sustained this head injury, a few of the people closest to her passed away.  She especially grieved the loss of her brother.  With the head injury, she was finding it difficult to cope with adversity. And now, she had so much grief to cope with.  Ultimately,  she turned to illegal drugs for comfort.

She realized her addiction was out of control when her sister started noticing odd patterns of behavior.  Zina normally visited her sister frequently; but now, she almost never dropped by.  Besides withdrawing, Zina became increasingly nocturnal.  Her sister observed her skulking around her apartment in the wee hours of the morning.  Then the next day, Zina didn’t even change her clothes.  In all these ways, Zina was not acting like herself.

As the addiction ran its course, Zina landed in the women’s shelter at the Salvation Army, where she lived for two years until she joined Supportive Housing Communities and moved into St. Johns Place.  Her time at the Salvation Army was both challenging and transformative.  The challenge was living in close quarters with so many other women in need.  When you get “a bunch of hormones altogether,” Zina says, you can count on a certain amount of drama.  Yet Zina found much to love about the community as well.  She especially loved the recovery community, which provided the support and structure she needed to brave sobriety.

She describes coming back to life after addiction.  When you’re addicted, she explains, you neglect all of your other bodily needs.  You become so out of touch with your body that you don’t even feel your own pain.  Then when you finally become sober, you rediscover all of the physical ailments you’ve been suppressing.  For instance, Zina discovered a terrible pain in her hip.  When she went to the hospital, the nurse asked, “How are you feeling today, Zina?”  At a volume audible to the entire waiting room, she announced, “Well, my *** hurts, but everything else is fine.”

When asked about her ambitions for the future, Zina gestured at the walls of her living room. “Tear that wall down!” she said, pointing to one wall. “Tear that wall down, too!” she said, pointing to another.  She wants to knock down her walls so that she can combine her apartment with an adjacent one to make a communal room for a recovery group.  These groups were most helpful to Zina when she most needed help.  Now, she is eager to help others.

“With the help of Supportive Housing Communities and my case manager Valerie Floyd, I have been given a fresh start at St. Johns Place and wants to help others do the same.”

The only problem is that her apartment isn’t as big as her heart.  Tear those walls down!